Enroll in Our CLASSES

If you're searching for ESL classes that welcome opportunities to discuss issues about religion and politics in an engaging way, look no further than sabri.org. Our language professor and author is passionate about helping non-native speakers learn English by using various effective second language teaching methods. Check out the following helpful resources to learn more. 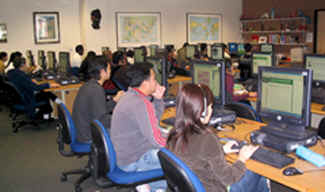 A Study by Dr. Sabri Bebawi

"Recently, it has become more evident that religion and politics have gotten married in a holy matrimony. I am writing specifically about the United States of America. Although our great Constitution makes it very clear that there could be  no law of the establishment of religion or that our government shall adopt a particular religion and that the separation of religion and State is sacred (Have you watched the Senate Hearing on Trump's Impeachment? It always started with a prayer to some person named "Jesus." Then, to add insult to injury, the Chief Justice of the Supreme Court asked the Senate to join him in saluting the bloody flag; How great America is!!!!!!!!!!!!!!!!! . Since Donald Trump, president-want-to-be, pretended to assume office on January 20, 2017, most Americans have become hypnotized. There are those who do not give a damn about the country anyway; there are those who care but in a state of hypnosis; and there are those who are aware, awake, and watching like I am.
While Donald Trump swore under oath to defend and protect our Constitution, he did nothing but go against the Constitution in every sense of the word. All his presidential orders turn out to be illegal. Not only that, he had the audacity to have his lover/wife, Melania, read the Lord’s Prayer in public without any consideration. In doing so, he was endorsing Christianity against our beloved Constitution. His media moment with the corrupt liars, cheaters, and thieves Evangelists was an indication of endorsing a religion, which is against everything America, stands. To add insult to injury, Donald Trump declares America a Guido-Christian country, which is clearly not constitutional.
Intelligent thinkers in the United States of America, though very few, know that Trump is not fit for the task he is attempting to take. He has destroyed the United States’ image in the world and has already been successful in abusing more than 95% of the US population. That happens when religion enters into politics. We must not forget the Catholic Church influence on the world, and we must not forget the influence of the Christian con artists Evangelicals who persuade the little-minded people that they are talking to God. It is the mission of this writer to expose the evil of Christianity that is not any different from the evil of Islam. The United States of America is a land for all, regardless of ideology or belief. That is how it had started and survived more than the expectations of most philosophers like the great French philosopher René Descartes who said, "America is an experiment that is doomed to fail."
I do not wish for the United States of America to fail. However, with the path of extreme capitalism and fascism that this government is taking, it is not unlikely. To achieve this positive outcome, we all have to stand against two evil forces: Christianity and Trump’s republicanism.
Instructional materials play a very important role to one’s learning and development. As an English educator dedicated to every student’s growth, I offer my works. They are the fruits of my years in the industry. I guarantee that they will provide you with everything you need to know about the English language. Contact me today for more information."
View Sabri G. Bebawi, Ph.D. Curriculum Vitae
Poet of Merit Award – 1989
- The American Poetry Anthology
APA Board Member
Nominee Poet of the Year – 1988
View Dr. Sabri Bebawi's Masters Thesis
View Dr. Sabri Bebawi PhD Dissertation

Fellow Citizens: Since we "pretend" to have a separation of religion and State, how is it conceivable that all the impeachment trial sessions begins with a prayer to Jesus of Nazareth? How about the 4300 different religions? Have we become "Christianists" as "Islamists?" 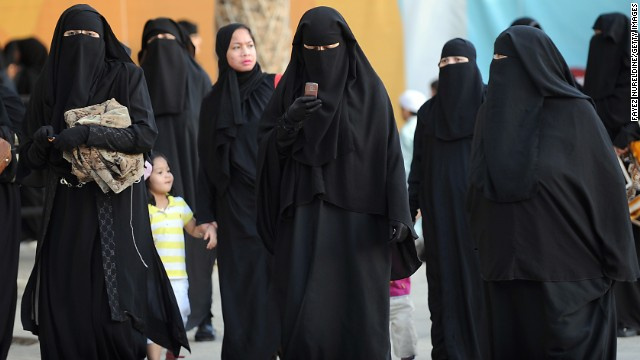 Islamism & Christianism in Both Corrupt Worlds: The Arab & USA 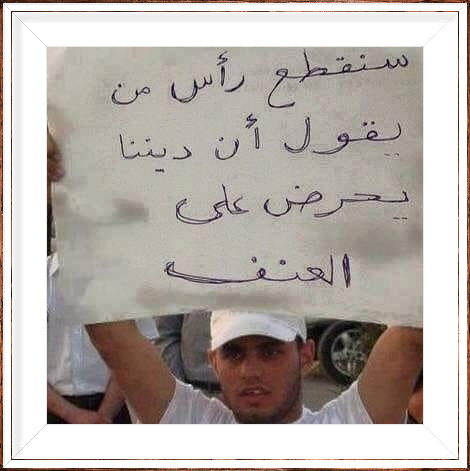 Trump Points His Finger, and a Life Is Ruined

Alexander Vindman joins the club of people whom the president has targeted for telling the truth. 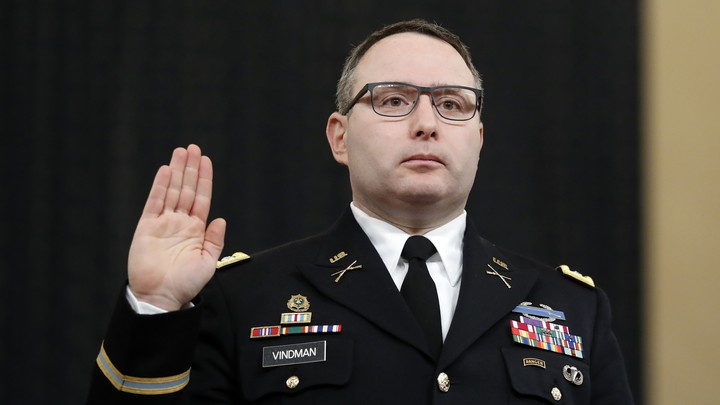 ANDREW HARNIK / AP
In 2018, Donald Trump waited to move against Attorney General Jeff Sessions until the day after the midterm elections—but he didn’t wait a day longer than that. No sooner were the elections over than Trump dismissed Sessions, who had upset the president by recusing himself from the Russia investigation. Sessions, Trump believed, was “supposed to protect” him. The first senator to endorse Trump’s bid for the presidency never regained his favor.

Trump managed to wait two days after his Senate acquittal before taking care of family business, as Michael Corleone would put it, with respect to those who had upset him in the Ukraine affair.

Yesterday, he removed from the National Security Council staff Lieutenant Colonel Alexander Vindman—along with Vindman’s twin brother, who served as an NSC attorney, for good measure. Lieutenant Colonel Vindman had had the temerity to object to Trump’s “perfect” phone call with Ukrainian President Volodymyr Zelensky and then committed the unforgivable sin of telling the truth about the matter when the House impeachment investigation sought his testimony. The brothers were, according to reports, escorted out of the White House complex.

Explaining himself this morning on Twitter, Trump, of course, went on the attack:

Fake News @CNN & MSDNC keep talking about “Lt. Col.” Vindman as though I should think only how wonderful he was. Actually, I don’t know him, never spoke to him, or met him (I don’t believe!) but, he was very insubordinate, reported contents of my ‘perfect’ calls incorrectly, & was given a horrendous report by his superior, the man he reported to, who publicly stated that Vindman had problems with judgement, adhering to the chain of command and leaking information. In other words, “OUT”.

Trump also fired Gordon Sondland, the ambassador to the European Union, who had tried to play both sides—testifying in a fashion that upset Trump while being cagey at first and thus raising questions to House members about his candor. Sondland had managed to please nobody, and his presence on the scene at all was, in any event, a function of his large donation to the presidential inaugural committee. He had bought his way into service at the pleasure of the president and, having done so, proceeded to displease the president. Most eyes will, I suspect, remain dry as Sondland blusters his way back to the hotel business.

(Retrieved from the Atlantic: https://www.theatlantic.com/ (February, 2020)

Impunity Is Triumphing Over Integrity

Trump’s attacks on public servants will do lasting damage to American diplomacy. 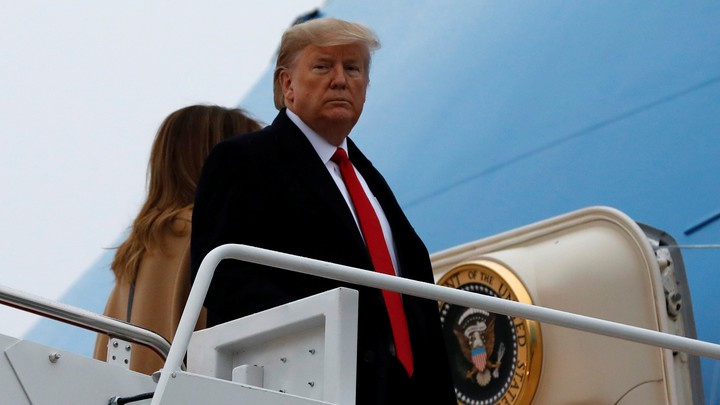 Three months ago, a group of obscure diplomatic and national-security professionals walked into a public spotlight that none of them ever sought. Called to testify in the congressional impeachment inquiry, they upheld their constitutional oath and told the truth, at considerable risk to themselves and their career. They displayed no signs of partisanship. They showed no prejudice as to the outcome of the inquiry. There was no daylight between their words and deeds and the declared policy of the White House. And there was no shortage of experience, expertise, and human decency. Their example of the ethos of public service and the power and purpose of American diplomacy provided a brief moment of light in a prolonged and dark saga.

After unceasing attacks on their character, service, and institutions by the administration and its partisan allies in Congress, after being thrown under the bus by their own bosses, and after the casual dismissal of their profound concerns about the dangerous precedent of a president putting political interest above the national interest, is that light now fading and forgotten? Has impunity triumphed over integrity?

Enroll in Our ESL Classes

English language proficiency for non-native speakers is possible with sabri.org. Learn from our expert! For more information about our services, do not hesitate to contact us.